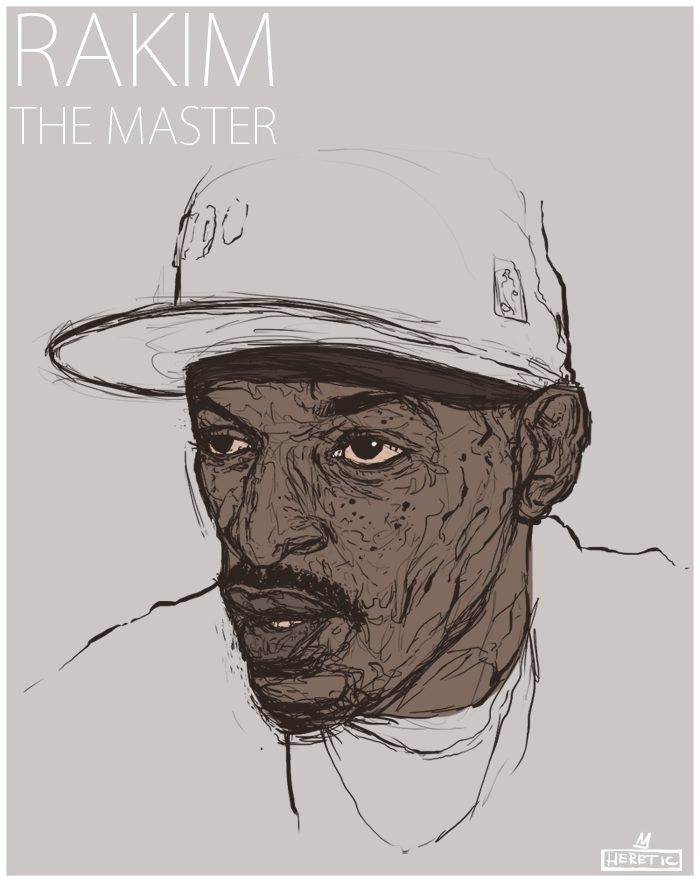 “The Master” is the second solo album by American Rapper Rakim and was released on November 30th, 1999, through Universal Records. It is the follow-up to Rakim’s debut solo album, The 18th Letter. The album was produced by DJ Clark Kent, Amen-Ra, DJ Premier, Rakim himself as well as a few other producers.

“The Master” starts with an “Intro” skit in which various people, among many big names in rap like Kidd Creole from Grandmaster Flash & The Furious Five talk about Rakim. They all do so in an admiring context, referring to him as “living legend”. Rakim gets into talking as well, telling us listeners that he certainly appreciates the love. Eventually, he kicks the album off with “Flow Forever”.

The song does what a good opener is supposed to do. First and foremost it shows, what Rakim “The God” is about: a fast, steady flow combined with revolutionary multi-syllable rhymes that don’t lack variety neither. They are all delivered in a rather laid back but immensely confident way.

The beat is a typical old-school beat, with slow kicks and a smooth keyboard sample. For the largest part of the track, Rakim viciously tears it apart. He shows us some smartly used wordplay as well, while doing so.

“Flow Forever” is a good opener for the reason that it introduces Rakim to the newer fans. But at the same time, it gives old-school hip-hop fans what they expect from a caliber like him:

The pace of the album increases in the second track “When I B on Tha Mic”. The track was produced by DJ Premier and samples a few of Rakim’s tracks from prior albums, like “The Saga Begins” and Run-DMC’s own “Peter Piper”. As DJ Premier is probably the most skilled and respected DJ in the universe of hip-hop, the track logically is one of the best on the album lyrically and musically. Rakim shows how much fun he had while recording it when he raps:

Ra out-rhymes himself with every pair of syllables that he drops. He stacks complex words on top of each other, creating multiple cross rhymes on averagely every second line.

He goes on with this journey until eventually reaching the ninth track, “It’s the R”. This is probably the best example of an incredibly steady flow on the album. In general, the track serves as an example of many things that will be looked upon more closely because it unifies everything that a good rap song stands for.

The track is full of funny metaphors as well as smartly put together wordplay. It features some double entendres as well, most notably to be heard in the third verse:

But “It’s the R” uses, like a lot of Rakim’s tracks do, a lot of samples as well. The most notable ones are to be found on the hook. They are taken directly from Rakim’s and Eric B’s classic songs “As The Rhyme Goes On” and “I Know You Got Soul”. All samples are mixed together for the hook:

As you probably see, the hook is very familiar to another famous rapper one’s. Of course, I am talking about the one from Eminem’s “The Way I Am”. Eminem used the hook from Rakim as an inspiration for his track. Rakim was and is one of Eminem’s biggest influences and Eminem reffered to this fact many times.

“It’s the R” is also another game-changing demonstration of Ra’s rhyming skills. When deconstructing the rhyme schemes in each verse, one soon notices that every verse is individually rhymed with the same syllables.

The song’s basic purpose is yet again to introduce Rakim to the younger generation of hip-hop fans, similarly like it was with “Flow Forever”. The track is the most fun to listen to on “The Master”. Rhyme- and flow-vise, it is one of Rakim’s best track to be ever released.

Cleverly presenting us his geographical skills as well as his knowledge of history and packing them into another groundbreaking line.

In general, it can be said that the “God MC” is pretty versatile in a lot of departments of Rap. “It’s a Must” shows us a rather new and aggressive side of Rakim, when being compared to older joints. Rahzel’s beatboxing proves to be enormously valuable to the overall sound of the track and both of them create yet another highlight on “The Master”.

The next highlight on the album comes up with a track that Rakim produced entirely by himself. This can be noticed soon in the track as the beat and delivery are quite different. However, the difference feels positively and refreshingly and therefore adds great value to the overall listening experience.

The track “Strong Island” is about Rakim’s start in the rap game in his hometown, New York, Long Island, in the late ’80s. As usual, the lyrics are constructed in a wide variety of rhyme schemes, again being internal- and multi-syllable heavy. First and foremost, Rakim tells listeners about his upcoming in rap:

The three verses of “Strong Island” all end with the same line, with Rakim proudly declaring, where he is from:

As soon as we turn the track on, we can hear the effort that Rakim put into the production and lyrics of this piece. Definitely a five-star track on every scale.

One of the fundamental things about Rakim’s music is him showing his deep connection to the prophet of the Muslim religion, Allah. He converted to Islam at a young age and you can tell by listening to his lyrics, that he is an extremely religious man. He sees himself as one of Allah’s advocates, as he tells us in the track “Waiting For The World To End”:

Rakim is also a member of the group of the “5 Percenters”. He was one of the first rappers to incorporate his religion into his music. In an interview with “Final Call” he told us that:

I love what I live and I live the Islam, so I applied it to everything I do, I applied it to my rhymes and I felt that I wanted the people to know what I knew. I felt that I was put here for that purpose and I just want to fulfill my legacy as far as being a conscious rapper and putting the word that I felt the streets needed to hear out there.

As with every hip-hop album, “The Master” contains some love songs as well.

One strong example of these is shown on the album’s 10th track, “I’ll Be There”. It is another highlight because of the honesty with which it is rapped. The special thing about the track is that Rakim is, in contrast to a lot of other rappers from his era, actually admitting a lot of his own mistakes. It is especially this part of the song’s third verse that leaves a deep impact on listeners:

When listening to the track we can exactly hear the pain in Rakim’s voice. The whole track seems to be dedicated to a woman who he cared for very much. At the beginning of the third verse he comes to the following realization:

“The Master” eventually ends with the track “We’ll Never Stop”, which shows another obvious but not yet discussed thing about Ra’: he is a real genius when it comes to choosing hooks for his tracks.

In the final track he features Connie McKendrick, who sings the hook in an amazingly well-sounding way:

At first, it seems like Rakim is rapping about picking up chicks at the club. But “We’ll Never Stop” seems much rather to be a witty metaphor for his love of hip-hop altogether. He considers rap as his life and synonymously puts it together with a special woman that he found:

Making the line a double-entendre, he says that his fascination for rap seems to have just started. He wants to find a new “hon”, which can be taken as a metaphor for a beat, that he can “crush”. My interpretation gets a little clearer as the track goes on and the second verse is about to end:

Saying that the only way to end violence on the streets is by connecting the people with a drug, in this case, rap music.

In the third verse it gets most obvious, as Ra’ finally calls the woman of his dreams by her name:

What Makes The Album so Special?

In the end, listening to “The Master” feels like traveling through time. From the moment of the introduction to the last track, the album straightly takes us back to the ’90s.

As true rap fans know, this was the time when rap music started to expand big-time, just like Rakim tells us on the skit “State of Hip Hop”. The interesting thing is, however, that Ra’ seems to support the expansion of rap in a big way, rather than down talking the other rappers. This shows that he cares more about the product as a whole than he does about his individual success.

“The Master” also takes listeners back to a time when rap was more about lyrical content than about boom-bap instrumentals. Rakim showcases his wittiness by out rapping every beat he gets on to rap. Just as he raps with an incredibly laid back and smoothly relaxed flow, he lets the genie of the mic shine through on every occasion that he gets. Like he says in “When I Be on Tha Mic”:

“Classic, this kid got his craft mastered”.

In the end, “The Master” is an album that possesses every quality that a fan of old-school rap can ask for. The album can be seen as the end of an era basically, due to its release in ’99, the last year of the old millennium.

Beat-vise the album is good overall, with some of them being excellent while few of them appear rather thin, even for 90’s standards. What they all got in common, however, is that they provide a good canvas for Rakim to rap on. All of the beats make his to this day superb lyrics shine in a masterful way. Nevertheless, the tough and dense productions never outshine the rhymes.

Everyone who listened to Rakim for the first time knows that this man is all about lyrics and flow. In these two categories, Ra arguably did the best work of his career up to the point of “The Master”’s release. In other words: when the track hit, it’s classic, yeah, that’s it.